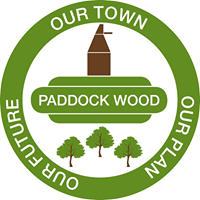 At the start of 2015 a steering group was established to oversee the process and preparation of the NP. Feria-Urbanism and Alison Eardley Consulting were appointed to assist in the preparation and development of the first stages.

Things moved swiftly at this point and the first public consultation exercise, organised by Feria-Urbanism and attended by residents of Paddock Wood, was held in March 2016. This was followed in late April by a two-day design forum. In July 2016 the draft interim report was presented to an audience of over 200 residents at the Primary School after which Feria-Urbanism was employed to take the project forward to the next stage. Throughout 2017 draft policies were developed and by January 2018 Feria had completed the second draft of the Neighbourhood Plan. Over the next few months following advice from Tunbridge Wells Borough Council some aspects of the Neighbourhood Plan were redrafted.

By the middle of 2018 it was becoming apparent that the Neighbourhood Plan was going to be affected significantly by the new TWBC draft local plan which proposes 4000 new homes around Paddock Wood. The Steering Group kept up to date with proposals for Paddock Wood but made the decision not to go out for further consultation until the draft local plan had been launched. Following considerable delays this was eventually launched in the summer of 2019.

In October 2019 the Steering Group decided it was time to proceed with the Neighbourhood Plan. It was at this stage we parted company with Feria Urbanism and sought a new consultant. Further delays due to the COVID 19 lockdown resulted but finally in June 2020 on the recommendation of the Steering Group, Paddock Wood Town Council employed Troy Planning and Design to take the Neighbourhood Plan through to completion.

Since then things have moved rapidly and the Neighbourhood Plan is about to consult with the residents of Paddock Wood as to whether the ideas and opinions previously expressed remain relevant.

An information leaflet on the draft Neighbourhood Plan vision and areas of focus for the plan, along with a questionnaire, was circulated to all residents of Paddock Wood during November and December 2020.

The results of the consultation at the end of 2020 were analysed and it was clear that the focus areas identified for the Neighbourhood Plan are well supported and appropriate, addressing many of the concerns held by the public. Those that disagreed did so on the grounds that these things haven’t been done sooner or they were dissatisfied with the prospect of any development at all – very rarely was a focus area deemed unimportant or not relevant for Paddock Wood. This reflected the extensive consultation efforts that were made during the early stages of work on the Neighbourhood Plan and feedback from this. Despite the pause in progress on the Plan, the survey responses ratified its focus and provided a strong foundation for ongoing work on it.

In May 2021 the steering group received a version of the revised Neighbourhood Plan from our consultants.  Previous drafts, papers and policies were consolidated into one document and the introduction updated to explain the relationship with the Local Plan.  Alterations had also been made to reflect feedback from the consultation ‘re-launch’ event, changes to national planning policy issued since early drafts were prepared, and reflecting the policies of the emerging TWBC Local Plan and associated Structure Plan within this.  In doing all of this our consultants identified the remaining gaps in the document.  These mainly related to green infrastructure, sports and recreation, the town centre and the development of design guides.

Between June and October 2021 AECOM, another consultancy, produced a series of design codes on behalf of the Steering Group which will provide detailed design “rules” that new development within a specified site or area should follow.  Once the Neighbourhood Plan is adopted, applicants, developers and landowners will be expected to follow the guidelines as they seek planning permission, TWBC will use them as they assess planning applications, the Town Council planning committee will use them to ensure design guidelines are complied with, and statutory consultees and the community will also be able to use them when they comment on planning applications.

By November 2021 the steering group had finalised a draft of what is called the regulation 14 consultation of the Neighbourhood Plan. This has been submitted to TWBC who will screen it on our behalf to see if an environmental assessment is required.  They will also comment and offer advice on the various policies within the document.

The next step after this will be to hold a formal six week consultation with the residents of Paddock Wood which will take place early in 2022.

To keep up to date with what is going on with all aspects of the Neighbourhood Plan you are welcome to join the Steering Group at its meetings.  These are currently being held via Zoom on the third Wednesday of the month at 7.00pm.  Invitations can be obtained via the agenda accessed through our Facebook page or the Town Council website. The Steering Group is very pleased to be moving forward with the project again although it is aware of the challenge of doing so at a time of limited face to face gatherings.