For a town of its size, Paddock Wood is unusual in not having its own community centre catering for the needs of local groups and residents.  Possible action to remedy this is currently being investigated but it will be some considerable time before any decision is taken.

al Hall providing a centre for social life and recreation.  It was located on land at the junction of Station Road and Commercial Road and was erected in 1901 in memory of Mary Elizabeth, wife of Major Horrocks of Mascalls, Paddock Wood.

The land was donated by the then Vicar of Paddock Wood, Rev. A Havergal Shaw.   The total cost of the building was around £1,950 made up of £700 given by Rev Shaw, £500 by Major Horrocks, £700 by friends outside the Parish and £58 by local residents.

A board of trustees was set up consisting of Major Horrocks, Rev Shaw and a Mr Storr of Matfield. Under the conditions of trust the Hall was not to be used for dancing or theatricals, nor on Sundays for any but religious purposes.  The new Hall was first used on Saturday 5th October 1901. 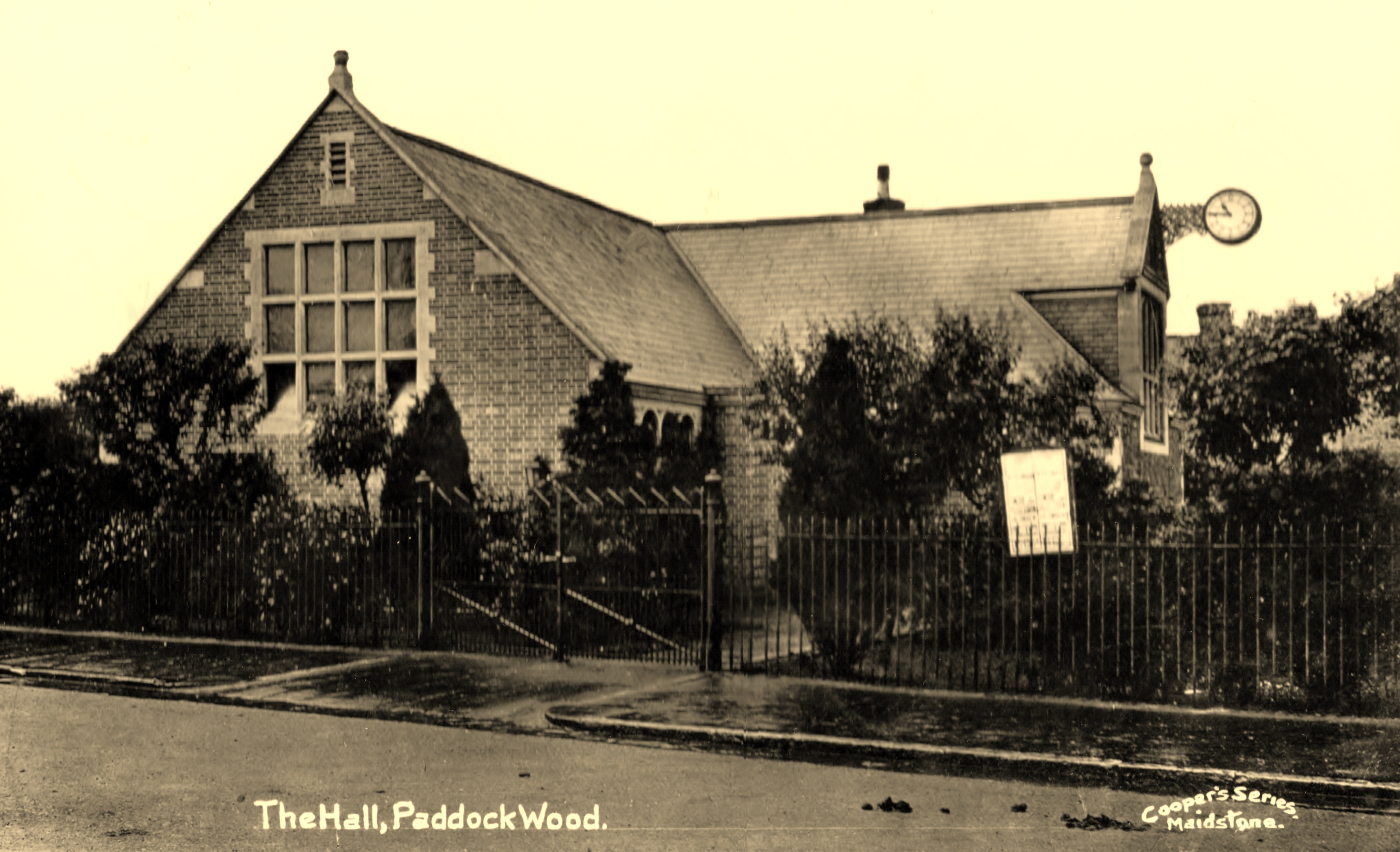 The building was of red brick with Bath stone dressing.  Inside, a large hall was set up with gymnastic apparatus.  Another room was used for the Men’s Social Club.  A billiard table and other games were provided together with a supply of newspapers and magazines.  Users of this facility paid 2d a week and honorary members paid 5 shillings annually.  There was also a smaller room at the back of the building known as the Parish Room which was used for mothers’ meetings, technical classes, a library and smaller parochial meetings. In 1903 a non-striking double-faced clock, costing £60 and financed by public subscription. was installed as a memorial to the late Queen Victoria.

In October 1914 the Hall found temporary use as a hospital for wounded soldiers.  In January 1915 the hospital was removed to Pembury but in October 1916 the hall was commandeered by the military as an ordnance depot. The military vacated the hall in February 1919 and the buildings were offered to a village committee of Paddock Wood.  The idea was that the Hall would act not only as a war memorial but would also be a social and recreation centre.  By this time the restrictions as to dancing etc had by general consent been relaxed but the conditions safeguarding the rights of the Church for its use on Sundays still continued.  The village committee was opposed to this, believing it to be contrary to the views of the original founder Major Horrocks and as a result the offer never came to fruition and the Hall continued to be run by a trust. 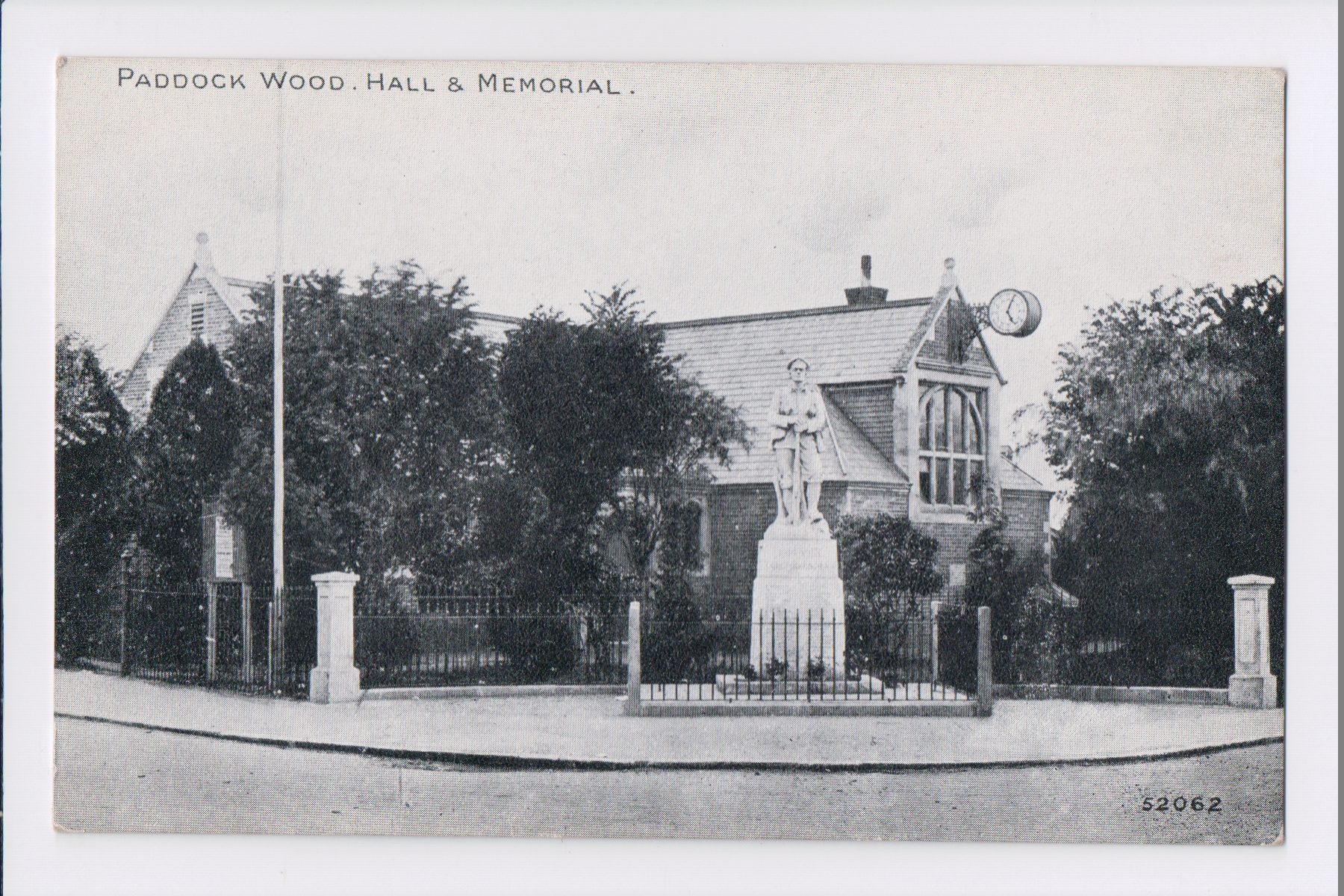 During the 1920s silent films and magic lantern shows were screened in the Hall every week.  The Hall was also used by the church social welfare and afforded regular Sunday schooling to many children in the village.  It was the Ambulance Brigade training centre and also continued to provide facilities for physical training and general recreation.  The local Home Guard trained there during the second world war after which the Hall was used as an annex of the Primary School.  The School vacated the premises in 1962 following which, and purely by chance, Paddock Wood Parish Council discovered that the Parochial Hall trustees proposed to dispose of the property on the grounds that income from it was insufficient to keep it going.  This caused great anger in the village because the trustees had let the Hall to the Education Authority and others at nominal rentals only, thus depriving the trust of an adequate and sufficient income.  The situation was not helped by the fact that subsequent attempts to book the Hall were being looked on unfavourably by the trustees. 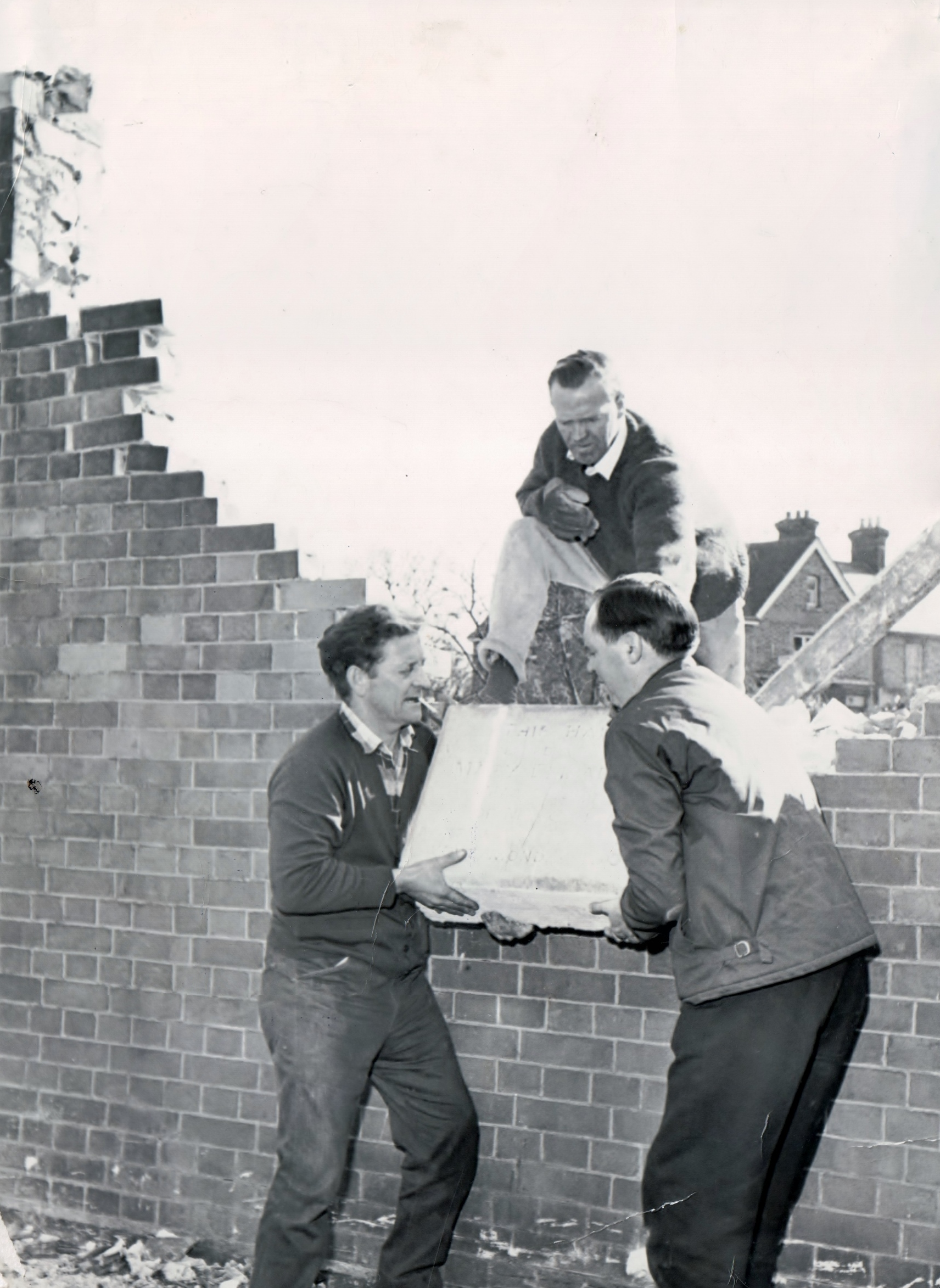 In 1965 the trustees, none of whom lived in or had knowledge of the Parish (which as it happened was in breach of the terms of the original trust) decided to demolish the Hall and sell the land including the war memorial for redevelopment.  Heated parish council and public meetings took place which hit the headlines nationally as the protests grew.  It was finally agreed that the war memorial must remain where it was as the land on which it stood had previously been conveyed to the Parish Council but the sale of the Hall could not be stopped.

The trustees offered the property to both the Church and the village, but at a price that was acceptable to neither. It was ultimately sold by auction to an outside concern for £26,700, demolition of the Hall being carried out by the developers in March 1967.  The only thing saved was the foundation stone of the original building.

A further controversy arose regarding the disposal of the sale proceeds.  The trustees had previously given an assurance that the money would be used to build a new Hall in Paddock Wood, with future maintenance costs being met from the ground rents accruing from the lease of the former site.  In the event, and for a variety of reasons, the trustees went back on their earlier undertaking and decided instead to spend the proceeds on the purchase of a curate’s house and the setting up of a trust fund to pay part of the curate’s salary, with the remainder being used as a contribution towards building a new hall at St Andrew’s Church.

Apart from the foundation stone one other relic of the old Hall perhaps survives.  The premises now occupied by the Red Cross shop are allegedly haunted by the ghost of Mary Elizabeth Horrocks, in whose memory as we have seen the Hall was originally built.

By John and Meryl Flashman