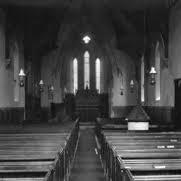 Paddock Wood’s history begins with the coming of the railway in 1842. Some people were already living in the area, mainly in the hamlet of Queen Street, but Paddock Wood village soon began to take shape with the coming of railwaymen and their families and rail facilities. However, for church and schooling, residents had to depend on Brenchley and so it was that in 1848 the Rev Davies, vicar of Brenchley , arranged for the top half of Coptgrove Oast, near the Elm Tree public house, to be adapted for use as a church on Sundays and as a school on weekdays. There was accommodation for about 100 people and services began in about 1849.

This venture was so successful that it was agreed to start a fund for a new dual-purpose building. A site on Bull Field, part of Mascalls Court Farm, was given by Mr James Morrison and by 9 May 1851 enough money had been raised to enable the foundation stone of the new schoolroom to be laid. Part of the money went towards repairs to Brenchley Church and the remainder towards the new church at Paddock Wood.

The new building (described as “a new schoolroom licensed for Divine Service”) was opened on 28 October 1851 by the Archbishop of Canterbury. It was capable of seating 230 people and had a small chancel which could be shut off when not used for Divine Service and also a small bell turret with a weather vane bearing the date 1851.

The new church was dedicated to St Andrew and the curate at Brenchley, the Rev Edwin Pope, was appointed Curate in Charge. Sadly, research so far has failed to discover why St Andrew was chosen for the dedication.

In 1859 it was decided that Paddock Wood should become a parish in its own right. In preparation for this the building was re-designed and refitted to be used solely as a church, the cost being £250. The refurbished church was consecrated by the Archbishop of Canterbury on 6th December 1859.

Following approval by the Privy Council and notification in the London Gazette the ecclesiastical parish of Paddock Wood was created on 30 October 1860. The Rev Edwin Pope became the first Vicar of Paddock Wood, a post he was to hold for the next 35 years.
A description of the church in 1895 confirms that it was a stone building, in the early gothic style with a chancel, nave, south porch, seating for 260 and a small turret at the NE angle of the church containing one bell. In 1880 the nave was lengthened 20 feet. In 1890-1 the church was repaired, re-floored, new heating apparatus fixed, and other improvements effected at a cost of about £400. A new organ was erected in 1891 at a cost of £180.

In 1895 Rev Pope was succeeded by Rev Alfred Shaw, who was followed by Canon George Charles in 1905. In that same year Paddock Wood parish was transferred from Canterbury Diocese to Rochester. In 1933 the incumbency passed to Rev Farnfield who sadly died suddenly the same year. Despite his being in post for such a short time parishioners and friends subscribed to a memorial window in the church which was dedicated on 11 October 1936.

Rev Peveril Turnbull succeeded Rev Farnfield in late 1933 and he in turn was succeeded by Rev Edward Thompson in 1936.

During World War Two Paddock Wood suffered little until the night of 4 November 1940. At 11 pm St Andrew’s Church received a direct hit from one of a string of bombs jettisoned, it is thought, by a German bomber being pursued by RAF fighters. Part of the roof fell in; other parts were left hanging dangerously. The vestry walls were down as was the arch of the apse with some feet of the main wall adjoining. Sadly, the most dangerous parts of the church had to be demolished.

Rev Thompson, together with loyal helpers set up a fresh church at the old school building (Church House) in Church Road which was quickly consecrated. Much was recovered from the ruins of the old church including the altar, oak reredos, communion linens, altar rails and the lectern. The church safe with its contents was also preserved intact. The Farnfield window which had been boarded up also survived and was later placed in the new St Andrew’s Church.

Church House continued to serve as the parish church from 1940 until 1955. A rebuilding fund was inaugurated as early as 1940 but not until 1953 did the Ministry of Works grant formal permission for a new church to be built. Many felt that rebuilding should take place on the old church site but a new site was eventually chosen. The parishioners set about taking down the ruins of the old church and on 1 July 1953 the foundation stone for the new St Andrew’s Church was laid by Lt Gen Sir Frederick Morgan KCB who spent a great deal of his early life at Mascalls.

After the destruction of the church, burials continued to take place in the churchyard up until the late 1950s when it became obvious that further space was required. The new Paddock Wood burial ground (opposite what is now Green Lane) was consecrated by the Bishop of Tonbridge on 18 March 1959 but interments in the old churchyard still continue for those with reserved burial rights.