Parish meeting poster to advertise parish meeting which was held 27th January 1953 to consider the purchase from KEC of 8.93 acres for use as a Recreation Ground and 2.49 acres for use as allotments at Mascalls for £2400.   If this proposal was agreed, the meeting was asked to authorise the Parish Council of Brenchley to borrow £3800 to meet the purchase price, cost of clearing and seeding ground, fencing etc

According to Jack Walker in his book the proceeds from the 1953 fete were donated to the Paddock Wood Recreation Grounds improvement fund.

4th April 1955 minutes: A piece of land adjoining PW playing field had been offered to the Paddock Wood Memorial Committee by the late Mr C R Wimshurst.  It was agreed that the council should offer to return the land to Mrs Wimshurst but requesting to keep it until after they moved to the new playing field.

Playing Field Committee meeting called for 14th April 1955 in order to get as much voluntary help as possible to carrying out work on Memorial playing field.

A further meeting on 19th April 1955 records that the Paddock Wood playing fields improvements committee purchased a mower and was considering purchasing a vehicle to draw the gang mower.

13th June 1955 minutes: reply from Mrs Wimshurst saying as the field was of little use to children in its present state she felt sure the Council would agree that she might resume use of the land at any time.  Council replied requesting retention of land until fete on July 16th.

Weeding of cricket square and tennis courts needed to be done and clubs asked to do it.

25th October 1955 minutes: Dedication of the strip of land along the Maidstone Road frontage to KCC had now been completed and the CC had erected a new spile fence in accordance with the terms of the agreement.

12th December 1955 minutes: Mr P West, Hon. Secretary of the Paddock Wood Recreation Improvements Fund, wrote to inform the Parish Council that Messrs Robert H Hall & Co’s tender of £500 for the Pavilion had been accepted. Messrs Padgham Bros. tender of £1,242.9s.5d had been accepted for the foundation work to the pavilion and erection of Implement shed and public conveniences.  The cost of all the above works would be borne by the Improvements Fund.  The Council approved.

16th Feb 1956 parish meeting minutes confirmed that parish council was paying back a loan.  The meeting was to discuss the sale of part of St Andrew’s recreation ground for housing in order to use the proceeds to pay off as much as possible of the loan raised to purchase the new playing field which would be ready for use in May 1956. 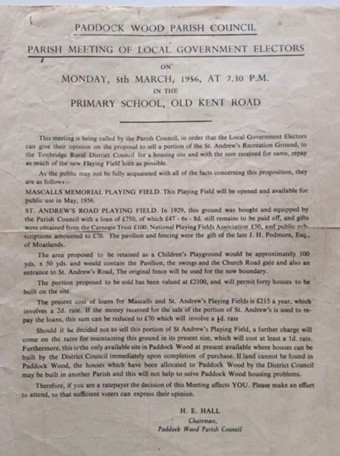 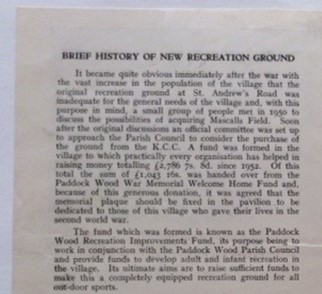 7th May 1956 minutes: memorial plaque to be unveiled by vicar at official opening of field and buildings.

28th May 1956 minutes: pavilion to be insured for £3250, conveniences for £500 and implement shed for £250.  Resolved to thanks the Improvements Committee for all the work they had done.

To prevent cars from being driven over the playing area 39 concrete posts were gifted to the parish council which were to be spaced evenly to stop cards getting through.

26th April 1957 minutes: access road from Ringden Avenue to playing field.  RDC informed PC of a plan being considered for hard standing for cars on spare land between the gardens of some of the Council houses and the PC new playing field.  Provision for access to this land had been made when the estate was laid out but no road had been made.  The parish agreed that the council would be prepared to contribute £100 towards the cost as the access road which would also serve the playing field and allotments. (to be budgeted for in the year 1958-9)

27th May 1957 minutes: Concrete practice pitch for use of cricket club had been laid down.  Concrete posts around car park also installed.

24th March 1958 minutes: confirmed that £100 would be given towards cost of constructing access road from Ringden avenue to the playing fields.

30th April 1962 minutes: Plans and the District Valuer’s report were placed before the Council for an exchange of Tonbridge RDC land at the rear of Ringden Avenue, the site to be used by the Parish Council for building a groundman’s cottage, for an area of the Memorial Playing Field, to be used by the District Council for garage purposes, subject to the payment by the parish council of a balance of cost.  The parish council agreed to this exchange subject to the approval of a parish meeting and ministry sanction, also subject to an amendment of plans to allow sufficient space between the tennis courts, and the proposed garages, to allow gang mowing.

July 2005 – Planning Permission was granted by TWBC for the erection of a workshop and ancillary accommodation for grounds maintenance staff.  These are the workshops currently in use today.

Research into the ownership of the Memorial Field has shown that the field was owned by KCC who originally intended to build Mascalls School on the site.  The deeds show that It was leased to Brenchley parish Council in 1948 and transferred to them in 1954.  In 1953 a parish meeting had been held by Brenchley parish council to discuss the borrowing of £3800 to meet the purchase price of the field, the cost of clearing it, fencing it etc.

There is no dispute that the people of Paddock Wood contributed money to a Paddock Wood Recreation Improvements fund and that the Paddock Wood War Memorial Welcome Home fund donated just over £1000 to this fund. As a result of their generous donation it was agreed that the memorial plaque should be fixed in the pavilion dedicated to those in the village who gave their lives in the second world war.  However, the Town Council has been able to find no evidence that they contributed towards the purchase of the field.  In fact, Paddock Wood parish council later tried to sell another playing field in order to pay back the loan taken out for the purchase of the Mascalls field.

The land was conveyed to Paddock Wood parish Council in 1957 when it became a separate parish and the deeds clearly show that the Council owns the field.  Solicitors have confirmed that the land is free of all encumbrances and that a Community Centre is considered “recreational use”.