In 1848 the celebrated author Charles Dickens (pictured left) wrote from Broadstairs to a friend, John Forster once the editor of the Daily News, a newspaper founded by Dickens, asking him to meet him at Paddock Wood railway station. From there they were to travel up to London. Three years earlier, in 1845, Dickens had planned a walk with Forster on his way back from Broadstairs. He wrote; “You will come down booked from Maidstone I will meet you at Paddock Wood and we will go thither in company over a most beautiful little line of railroad.”

It was Walter Dexter, author of the Kent of Dickens, who discovered that Dickens had been a great lover of the beauty of the Medway valley between Paddock Wood and Maidstone, and that he often used Paddock Wood railway station 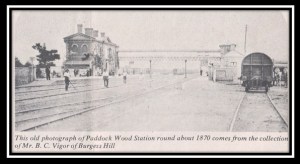 as the starting point for his perambulations with friends he met from the train.

It is generally agreed that the demise of the character, James Carker, in Dickens’ novel, Dombey and Son, (1846-8) who was run over by a railway train, took place in Paddock Wood. The Revd Canon Benham, in his Memorials of Old Kent, published in 1907, wrote that: Carker’s death unmistakably occurs at Paddock Wood station”. No details are given of the train that killed James Carker, nor is there any evidence to suggest that Dickens himself ever stayed overnight in Paddock Wood. However, one member of Dickens’s family did later reside for a short while in Paddock Wood.

It is now known that the “Dorothy Gertrude Maria Dickens, 1868-1930” inscription on the gravestone in the Old Cemetery at Paddock Wood relates to a granddaughter of Charles Dickens. The parish burial records for 1930 list the demise of “Dorothy Gertrude Maria Dickens” who lived in Paddock Wood, and was buried on the 27 November 1930, aged 62, following a funeral service conducted by the Revd George Charles. Dorothy was the daughter of Dickens’ first child, Charles

Dorothy was born on 7 February 1868 and baptised on 11 March 1868 at St Marks, Regents Park, London. Her birth was registered as Gertrude Maria Dickens daughter of Charles and Elizabeth Dickens of 18 Gloucester Road, Regents Park. Charles occupation was described as paper manufacturer.

The census of 1871 records that the family was still living at 18 Gloucester Road and that Charles was proprietor and editor of the weekly journal “All the Year Round”. There were six children in the family of whom Dorothy (then known as Gertrude) was the fourth.

Ten years later, in 1881, Dorothy (still known as Gertrude) together with an older sister and brother were listed with their mother’s sister Margaret Orridge at 5 Albert Road, St Peter, Brighton, Sussex.
In 1891, again still known as Gertrude, Dorothy was living with her parents at 62 Regents Park Road, St Pancras, London, her occupation at this time being described as type-writer. In the 1901 census Dorothy (as she was now known), a domestic nurse, was living with her widowed mother at 20 Charlville Mansions, Barons Court, Fulham.

In July 1909 Dorothy, along with three of her unmarried sisters, received a pension from the Civil List of £25 per annum, in recognition of the literary eminence of her grandfather Charles Dickens and in consideration of her straitened circumstances.

By 1911 Dorothy was a care home assistant in a private home for children at Pierremont Avenue, Broadstairs, Kent. It is not known what happened to her in the years immediately after 1911 but from contemporary newspaper reports it is clear that in the autumn of 1930, for the benefit of her health, she decided to live in Paddock Wood. The address to which she moved was Acorn Villa in Church Road (more or less on the site now occupied by the Simla Tandoori), premises which at the time housed the Acorn restaurant. Her death, which occurred in the restaurant, appears have been very sudden. There is some suggestion that she may have been employed in the restaurant at the time of her death.

Probate of her will was granted on 9 December 1930 to her older sister Mary Angela Dickens. Dorothy’s residence at death is recorded in the Probate Register simply as Church Road, Paddock Wood. Her estate was valued at £62-14-0, equivalent to just under £3,000 today. 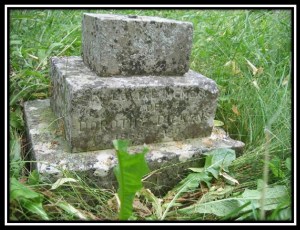