Between 1892 and 1961, a single-line steam railway, developed by the talented young engineer Holman Fred Stephens, linked the rural communities of Paddock Wood, Horsmonden, Goudhurst, Cranbrook and Hawkhurst.
It also brought thousands of residents from the East End of London to the area every summer for their annual hop-picking “holiday” in this area of Kent, thus earning this iconic little railway the proud nickname of the “Hop Pickers Line”.
Representatives of the five communities, together with local authority partners in the new interpretation scheme for the Hop Pickers Line project, joined with Southeastern Railway managers at Paddock Wood Station on 4th July for the formal opening of the first information panel for the Hop Pickers Line recently installed at the station.

Researched and produced by talented designer Martyn Hey, the panels provide a map showing the 11-mile route of the original line, together with many attractive graphics and useful information about the route, including locations where it may still be visible. The map also gives a brief overview of each of the line’s five destinations, their railway heritage and a short description of how they have subsequently evolved into the attractive communities which may be visited and enjoyed today.

In formally opening the Hop Pickers Line Information Panels and cutting the special celebration cake, Councillor Elizabeth Thomas, Chair of Paddock Wood Town Council, spoke of Paddock Wood’s proud railway heritage, congratulating all those involved in providing a wealth of interesting information and social history within the panels to be appreciated by both residents and visitors to this scenic part of the Garden of England. 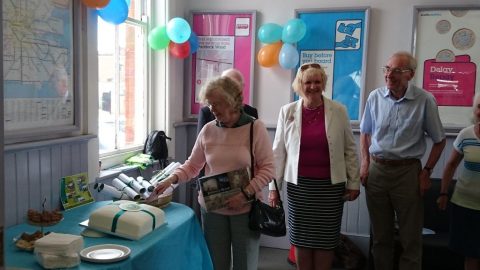 The Horsmonden Parish Council, in conjunction with the Hop Pickers Line Heritage Group and Horsmonden Nostalgia Group, are pleased to announce the official unveiling event of two new Information Panels which took place Saturday 26th June 2021 at the Village Green in Horsmonden.

The Conservation Area map of Listed Buildings around the Village Green was originally unveiled in 2014. This was instigated and designed by the late John Naylor, a Horsmonden resident, who had a keen interest in the Parish. John was assisted by the Conservation Team at Tunbridge Wells Borough Council. The revised version of the map has had a few minor amendments to demonstrate the architectural changes to the properties shown and will allow those passing by to continue to read about the architectural heritage of the village centre for years to come. The project was funded by Horsmonden Parish Council using a legacy which was kindly donated to the parish by a late parishioner.

The Hop Pickers Line Heritage Group are delighted that their new Information Panel sits next to the Conservation Area Map in a prime spot for visitors to see at the bottom of the Village Green in Horsmonden.

Between 1892 and 1961 a single line steam railway, developed by the talented young engineer Holman Fred Stephens, linked the rural communities of Paddock Wood, Horsmonden, Goudhurst, Cranbrook and Hawkhurst. It also brought thousands of residents from the East End of London to the area every summer for their annual ‘hop-picking holiday’ in this area of Kent, the Garden of England, thus earning this iconic little railway the proud nickname of ‘The Hop Pickers Line’.

Horsmonden during this period had around 35 hop farms and every autumn, families with ‘hops in their blood’ still visit the farms where once they visited every hop picking season – it was such an important and enjoyable time for them.

There were sidings at Churn Lane for storage of goods trucks and two at the station.  Fruit was loaded for transportation to London markets from one siding and from the other various important materials were loaded, including cattle and lambs, as well as coal for the village coal merchants and the nearby steam engine business of Chris Lambert.

Sunday 11th June 1961 saw the very last public train and on the following day, Monday 12th June 1961, all services from Paddock Wood to Hawkhurst via Horsmonden, Goudhurst and Cranbrook were withdrawn.

Today just one operational hop farm exists, where at Hayle Farm, Richard Edmed grows just shy of 35 acres of hops but of course machines have taken over where hops were once all hand-picked.

The new Information Panel was designed by Martyn Hey for HPLHG and was generously funded by Tunbridge Wells Borough Council, Horsmonden Parish Council (using a generous legacy left to the village) and Horsmonden Nostalgia Group.

It shows the route of the Hawkhurst Branch Line along which there were hundreds of hop farms.

This will be the fifth Information Panel to be introduced, others in Paddock Wood and Goudhurst and at Willow Lane there is a finger post showing where the track was situated can be seen.

Unfortunately, Yolanda Laybourne, Chair of the Hop Pickers Line Heritage Group, who is making good recovery from a recent knee replacement operation, was unable to attend.

Thank you to the many visitors who took an interest in looking at the new Information Panels and displays of the Hop Pickers Line and Past Horsmonden photographs. 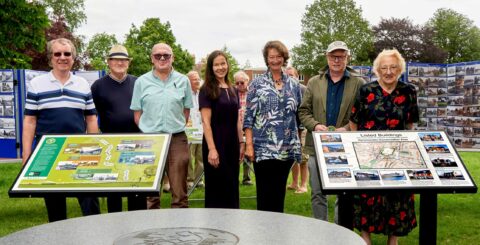