The issue of cars speeding on the roads of Paddock Wood began well over 100 years ago. Until the 1890s horses were the principal means of transport but they were gradually replaced by cars. The infrastructure of roads and pavements were not in place however and naturally with such dramatic changes came serious concerns about the need to prevent ‘reckless behaviour’. A need to review existing law was recognised (although frightening horses was forbidden!)

In 1895 the first motoring offence was registered and the first speeding fine in the country happened in Paddock Wood on 28th January 1896. 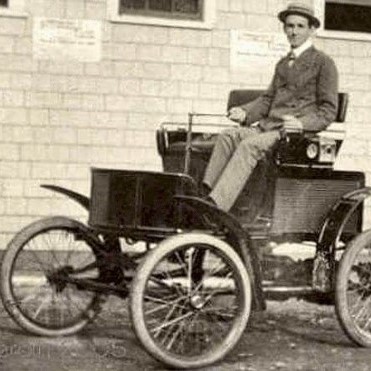 William Arnold of East Peckham is said to have owned the first car in Kent. This was a ‘Benz’ imported from Germany. The car was used as a pattern to build other vehicles. William, perhaps to be regarded as the ‘boy racer’ of the time, was spotted by a police constable speeding at 8 mph exceeding the 2mph speed limit by a considerable margin. After a high speed five mile chase on his bicycle which apparently lasted for half an hour, the constable apprehended the culprit and the offending vehicle was brought to a halt.
William Arnold was prosecuted by Magistrates at Tonbridge for operating a car without
“at least three persons to conduct the car one of them preceding the same by at least 20 yds carrying a red flag…..and at a speed no greater than two miles an hour and not having the name and residence of the owner displayed”
He pleaded guilty and Arnold tried to argue that his car was outside of the scope of the law. It seemed reasonable as The Red Flag Act of 1865 really related to steam driven traction engines. Having refused the option of seven days hard labour, which seems a little harsh compared to the options for offending motorists today, William paid a fine of £4 7s (four pounds seven shillings) approximately £200 in today’s money. The fine was lenient (perhaps because the magistrates recognised a need to update the law.)
And so it came to be in 1895 the first motoring offence was registered; the following year the first pedestrian was killed by a horseless carriage; and in 1898 the first driver – at the controls of a vehicle doing the reckless speed of 17mph – was killed.